So no, still no musical activity, although I’m starting to think about it more. I have a sort of vague idea about where to start on the recorder quartet, now I just need to force myself to sit down and work on it.

But the house is progressing! This weekend I finally moved on from the endless sweep-and-vacuum routine I’ve been in for about the past two weeks and moved on to MOPPING. Yes, mopping. I went out and bought a £2 old-fashioned rope mop and after a last sweep-and-vacuum I started mopping the top floor.

I think from these photos it should be clear that I have not over-exaggerated the extent of the dust (and remember, this is after about 4 rounds of sweeping and vacuuming already!): It’s great that the floor looks so dark after mopping, actually – it’s confirmed for both of us that we want to seriously consider dark floors throughout the house – it really does make the room feel much wider than the pale floor. The ceiling feels a little lower though, than with the light colour, so I don’t think I’ll be painting the skirting boards dark now but I really think it’ll look great when it’s a dark grey.

Unfortunately it’s also highlighted just how careless previous painters have been, especially in Djelibeybi’s study – blops all over the place, so I think I’m going to have to get in there with paint stripper or something before the Great Limewash Experiment commences.

Speaking of which, the course I was going to do filled up faster than anticipated so I’ve had to scrap that plan. To be honest, I’m not that sorry – I’ve been absolutely exhausted with everything I’ve been trying to fit in the past couple of weeks – work at the house, client work, preparing my renewed portfolio so I can apply for a real contract soon, not to mention dealing with having to get the half-crown installed on my tooth that was root-canalled over a year ago. So not having to go to Chichester, with all the attendant finding accommodation and working out travel, has actually been quite welcome.

Instead, today I made use of the Amazon gift voucher my lovely mama gave me for my birthday and bought two books which I think will help me with the Great Limewashing Experiment: 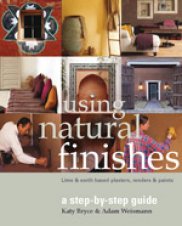 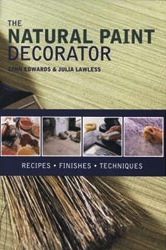 They both include recipes for natural paints, but while the first one looks immensely practical, including tips on what might have caused various problems, the second one looks like it might have some more creative ideas and just generally looked interesting.

So the plan now is: washing and scrubbing for the moment, then steam-cleaning (probably not till Djeli’s done whatever needs to happen with the ceilings – either patching or replacing). I’ll see how much of the paint splotches come off with the steaming and if need be then I’ll move on to paint-removing. Once that’s done and I feel the floors are as clean as can be, I’ll start the limewashing. Have to get onto the intense cleaning pretty quickly though – each thin coat of limewash needs to dry for about 24 hours, and if the employment monster takes me, the time to get 3 or 4 coats done (or preferably 5) before we move on 8 June is going to be very tight indeed!

I’m still plotting a day for people to come and join in the cleanup fun – unfortunately it seems the new weekend I’d planned (2 June) is the Jubilee weekend when some people will be joining in the festivities (and I’m hoping to be one of them 😀 ) and others will have fled in terror. So I need a new plan and I’m not sure what it will be.

But first for more cleaning!