I’ve been putting off writing about my new Lou Box Top because I still haven’t managed to get a proper photograph of it. I seem to be continually throwing it on and then bolting out the door. Or it’s raining if I have 10 spare minutes between these two things. Or it’s in the wash and I’m not ironing it when it’s dirty because I loathe ironing. Someday soon perhaps it’ll happen, but in the meantime, here’s proof it’s actually being worn: 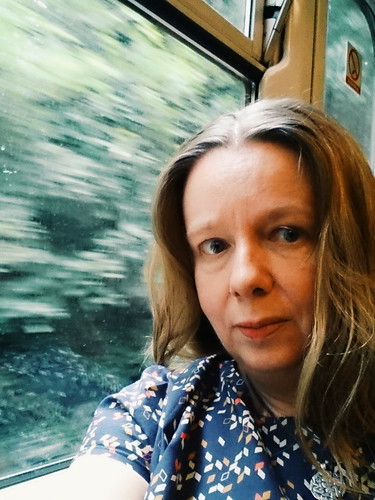 See? I’m really super-pleased with it. And the shape is actually quite flattering, which sort of surprised me, even though I hoped it might be. Definitely glad I did the M-L size rather than the XL-XXL. It could perhaps do with a tad more ease around the bust, but I’d have been swimming in the other and it’s really fine. Am outrageously pleased with my SUPER-FLAT and also first-ever attempt at a bias-bound neckline. Great British Sewing Bee freaked me out about bias-binding, but thanks to some great tutorials on the internets it’s come out basically perfect (if you ignore a couple of absolutely minute folds, which I do). The fabric is gorgeous, too. Beautiful, easy to sew, super-lightweight, pure cotton and – amazingly – it doesn’t seem to crush!!! The first time I wore this was to a soundwalk we were doing in Blackheath. A wet-yet-warm day, even at the end after coming and going under a raincoat and walking-miles-across-the-heath sweatiness, it barely looked worn. I’d expected it to be a disastrous crumpled mess, especially around the middle, where the raincoat cinches in, but NO! Also got some really nice compliments on it, which always feels good, especially when you feel you’ve personified “scruffy student” for the past 5 years, even though you were only a student for 2 of those…

I’m planning another version, to try out the scoop neck variant, but have been both insanely busy and penniless, so that might have to wait till July.

The sewing machine feet I ordered in (invisible zipper foot from America and a walking foot from Hong Kong – seems my machine is a mystery to sewing shops here) have arrived, so next up will probably be the Tilly and the Buttons Delphine skirt in the navy blue stag-beetle fabric I bought from Ikea ages ago before I was really thinking about sewing clothes. No clue why I bought it, actually, but I just loved it and it was super-cheap, so home it came. I’m also hatching plans to start having a go at sewing jersey now I have the walking foot that people say is necessary to get a nice finish.

It’s really interesting, this clothes-sewing malarkey. I’ve never been much interested in fashion – mostly self-defense, really, I suspect – but now that I’m reading a bunch of sewing blogs which tend to be focused on making up independent patterns, I’m seeing the same items coming up again and again and it’s like a little alternative fashion scene, all handmade, with nods to mainstream fashion but also responding to whatever patterns have recently been released. So I’m becoming a little more aware of what may or may not be in fashion and whether there’s any chance I could wear it – and because I’d be making things myself, it’s quite amazing to me to think about how many things I’m seeing and admiring on sewing blogs I might actually be able to wear, once I learn how to do an FBA, rather than just having to dismiss them because there’s no way they’d work on me.

Anyway, so that’s clothes, but I’ve been on a clothes-sewing hiatus this week because the gig’s on Thursday and this insane score has required a ton of unusual work. This morning I’ve finished sewing the 10m of hem and have moved on to the woodwork. Now there’s only the calligraphy and assembly to go. Fingers crossed I get it all done in time!!! 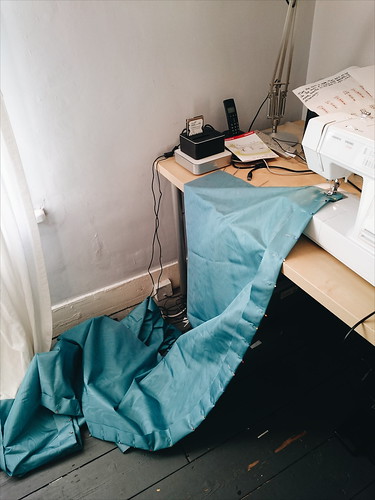