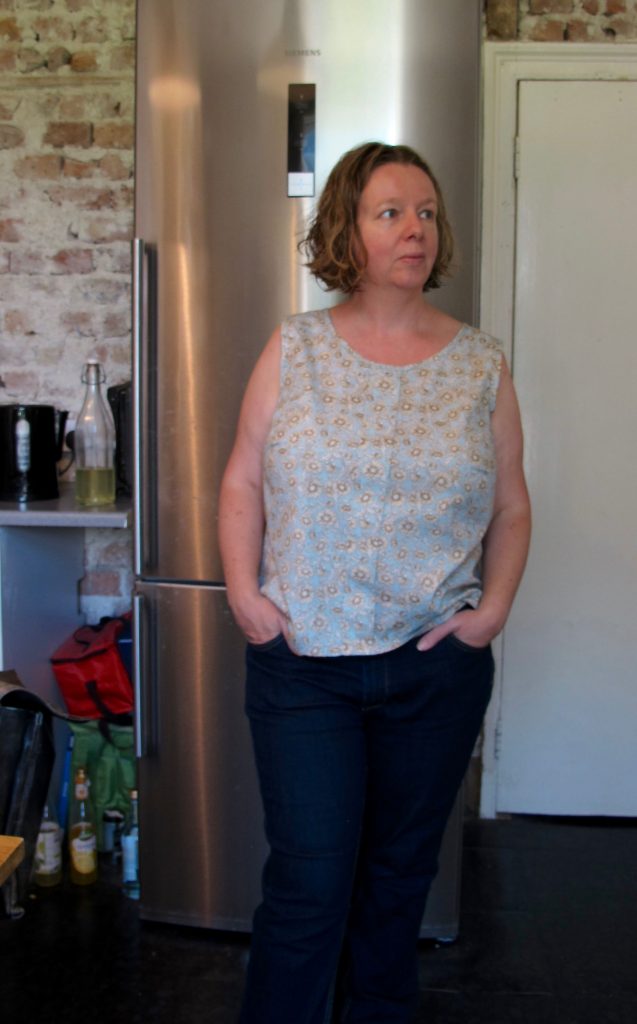 OK, so this isn’t perfect (what is?!) but hey! It’s wearable! And pretty darned cute, if I may say so! And still fits better than just about anything readymade I could buy that isn’t jersey, and even better than some that is jersey, so I’m super-happy with it.

So this is my first I-WILL-MASTER-THE-FBA Sorbetto. This is a free pattern from Colette – a super-simple woven tank made not-boring by the nice pleat down the front. It has darts ready for your FBA-slashing pleasure, but unlike most things with darts that I could find and actually liked, its only waist shaping is in the side seams, so I was able to focus entirely on what was going on in the bust region without having to fret about whether it was going to adversely interact with waist darts or dart tucks a la the Megan dress mess.

And I’m pretty pleased with my alterations! According to my measurements, I needed a 1.5″ FBA. The course I’ve got on Craftsy said that usually you can pull back on the actual FBA amount because ease, so I actually did a 1.25″ FBA. This was wearable but definitely too small for me. Fortunately I remembered that I had this lovely pleat down the front so stole another 1/4″ from each side of that and I’m happy with the breathing room I now have and it reduced the problems with the armholes so for the next one I’ll definitely do the full 1.5″ FBA.

The other problem is, I believe, due to my being dense and forgetting to mark in the pleat line, so measuring my bust point on the pattern with the edge of the pattern piece along my centre front – which of course put the whole thing about an inch (or 3/4″ after I’d messed with the pleat) further towards my middle than it should have been, so the darts are now too far forward but this should be corrected, or at least improved by actually being sensible and noting down essential details next time.

This project has seen a few firsts for me, for all that it’s so simple: first time changing my sewing machine’s needle, first pleat, first time making continuous bias binding and folding it using a bias binder maker, first time doing a visible bias finish.

Also, first time taking my own photos, using my camera’s self-timer feature, which has gone better than expected even with the blurriness because the camera didn’t want to focus on the fridge. Will experiment with different walls, but this is definitely easier than trying to get a reluctant Djelibeybi to do it.

Size: 12 in the shoulders/bust grading out to 14 in the hips. Size 16 length because people said it was quite short

Adjustments: 1.25″ full bust adjustment, centre pleat let out by 0.5″ (total). Used 18mm bias tape because I’d inadvertently done my staystitching at 1/4″ which was clearly visible with the 12mm bias tape specified. Still some bits poking out but I doubt anyone but me will notice. Next time need to make sure I do the staystitching REALLY close to the edge, but think I might still use the 18mm tape because I quite like the look of it.

I’ve paused on Wardrobe Architect because the rest of the series is on planning a capsule wardrobe – there are good things in there, but given my general confusion about what suits me and not really knowing what I like to wear, I think I’m still more in a place of experimentation rather than sensible planning, so will continue haphazardly making things that appeal and working my way through Love At First Stitch instead. However, with WA ideas in mind, I think the colour of this top (duck-egg blue) really really suits me, and I like the simple William Morris-style floral print. The shape is really comfortable to wear and while I still look a bit blobby in these photos, when there’s a bit of movement I think it’s really flattering and Djeli agrees.

Onwards to the next one, then: this time with FEATHERS!