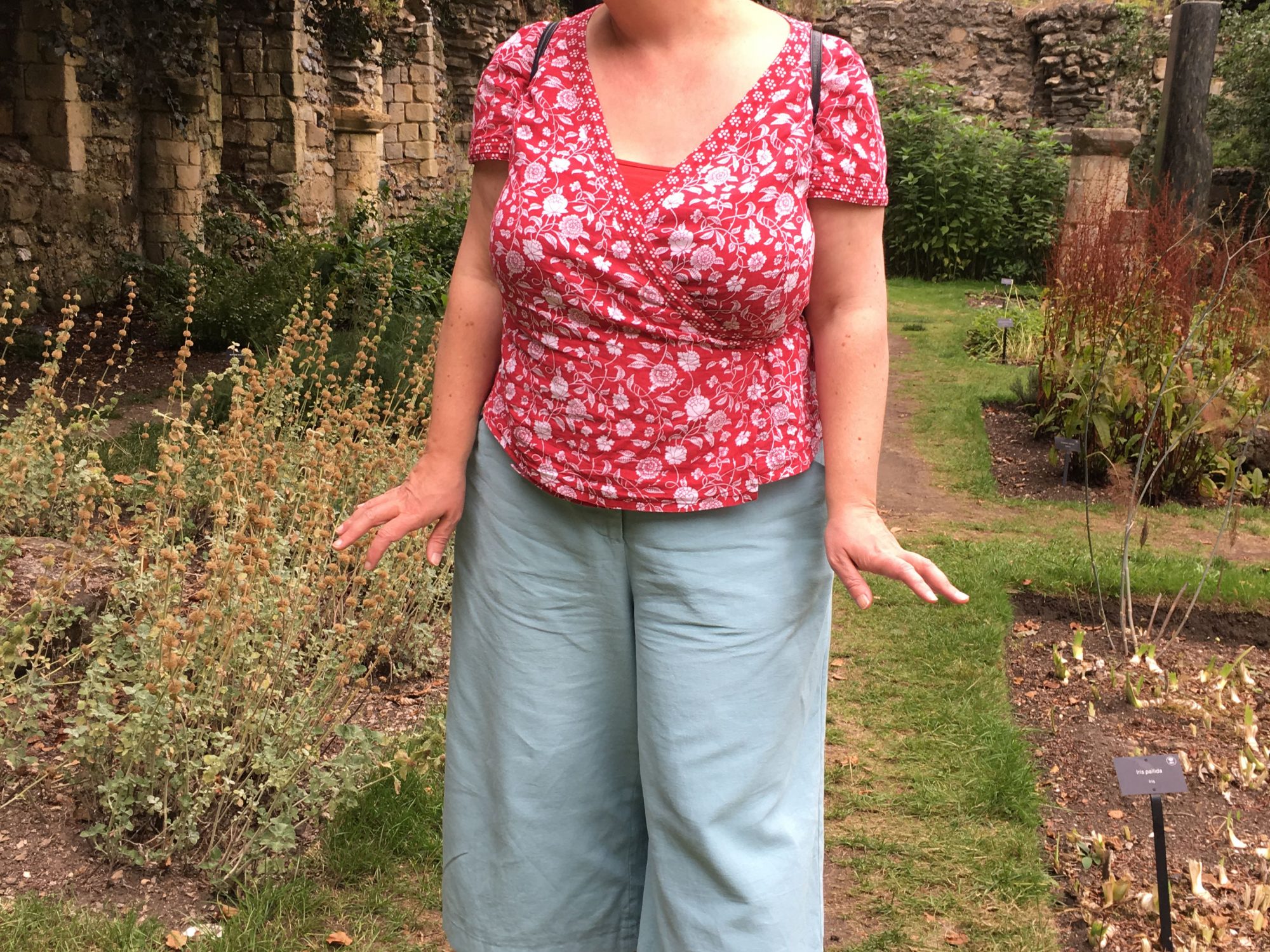 OK, well, not ACTUALLY free, because I had to buy the material, the zipper, the thread and the button, but hey, the pattern was free and that’s good, right? And all the more so when you’re as pleased with the result as I am!

This was my first time trying one of the free patterns by In The Folds that Peppermint Magazine posts on their website each month to coincide with the publication of their magazine. I’ve been looking at these patterns for a while, but a lot of the styles just wouldn’t work on me (oh God frills). Then this wide-leg cropped pants trend hit and while it took me a while to be convinced of it and even longer to consider that it might be something I could at least try to wear, I have finally Given It A Go.

Because I’ve never made proper pants before and was worried about the fly, I started by reading Lladybird’s pants-fitting post which I spotted in my feed a little while back. She is insistent in this post that one should absolutely make a muslin to check the crotch depth rather than just (as I had been planning) measuring the paper pattern and just hacking a bit of excess out. This was a little disappointing because I HATE making muslins that I know won’t at least be wearable around the house, but you know what? I am SO glad I did. I ended up making two muslins – one very rough with some Ikea calico I had lurking in the basement  and then a wearable toile of shorts using the leftover fabric from my yellow boxes skirt. This was A Very Good Idea, although it was annoying and slow at the time. The calico muslin identified crucial fit issues (particularly the crotch depth), and the shorts not only allowed me to identify further tweaks that needed to be made (more crotch depth changes, waaaay too big around the waist) but gave me the chance to test the instructions and have a go at assembling the fly in a fabric that it didn’t hugely matter if I messed it up.

Rather than going through the changes I made blow by blow for each version, though, I think I’ll just do a summary of what I changed:

Overall, I’m really rather pleased with the fit of them. However, on completion I felt the waist still needed to come in by about another 2 inches, which was just too much to cinch in with a belt. Fortunately I thought to wash them first, in case the fabric shrank at all (in spite of prewashing) and they did – to the extent that I don’t feel I actually need to adjust them now although they do kind of need the belt. I feel they’re a little wide at the hips still perhaps, which feels like it might be from my grading endeavours, but overall they’re fine and I don’t feel inclined to tinker with them much while they’re working for me – if/when I start to lose weight again (going through a stressy time at the moment and about to go back to Aus for a couple of months so that’s unlikely for a while) I’ll probably take them in a bit. They’ve also shrunk upwards a bit too so they’re a little more cropped than originally planned but I feel this is actually working better, so hurrah!

I do plan to take in the sides of the shorts version though as I can’t really wear them without and they don’t have belt loops. For all that I messed up the pattern placement (was trying so hard to avoid having triangles pointing towards my crotch that I totally didn’t recognise other unfortunate pattern placement, especially the black diamond in an awkward position on my bum…) the shape of them’s nice and I may just try to dye them black to minimise the pattern awkwardness.

I was very pleased with my finishing on the shorts, but that ended up a bit of a mess on the proper pair because apparently I can’t do stitch-in-the-ditch to save my life, and then there was the too-short zipper and all in all there’s a lot of messy hacky handstitching that was needed to ensure things didn’t come adrift or unravel. Mostly I think it wouldn’t be too visible under normal circumstances, and I mostly don’t tuck tops in anyway because of being quite shortwaisted

The belt loops I messed up the positioning of a bit – they’re the same positions as for my Delphine, but clearly what works for a skirt doesn’t work quite the same for pants, so I’ve had to add an additional loop at the centre back because the belt keeps riding up.

Size: Waist size H, hips size G – if I were to retrace this, I’d probably do G all over

Fabric: Duck-egg blue cotton twill from Rolls & Rems – gorgeous fabric, easy to sew, but frays like the devil. Pockets lined with a cotton lawn from Ikea.

Skills learned: Crotch rise fitting, zipper shortening, fly construction, first time making a proper buttonhole (as in, for a button rather than buttonholes to thread stuff through which don’t need to be so accurate)

Thanks to: Cari (@as_eye_sew) on Instagram, for her munchkin-pockets post which made me realise I should look at how to adjust the height of the pants; Jay Jay (@thecamdenstitch) on Instagram, for her post pointing out that there’s a mismatch between piece names in the pattern and that one should follow the piece numbers, not names, in the instructions; and of course Lladybird for the fitting-advice blog.

Next time: Probably size down to a G all over, given the excess at the waist, definitely do belt loops again, but fully assess the positioning on this pair to work better. I’m thinking a pair in a lightweight wool would be lovely for winter, perhaps with a slight narrowing of the legs (they really are pretty damn wide!)