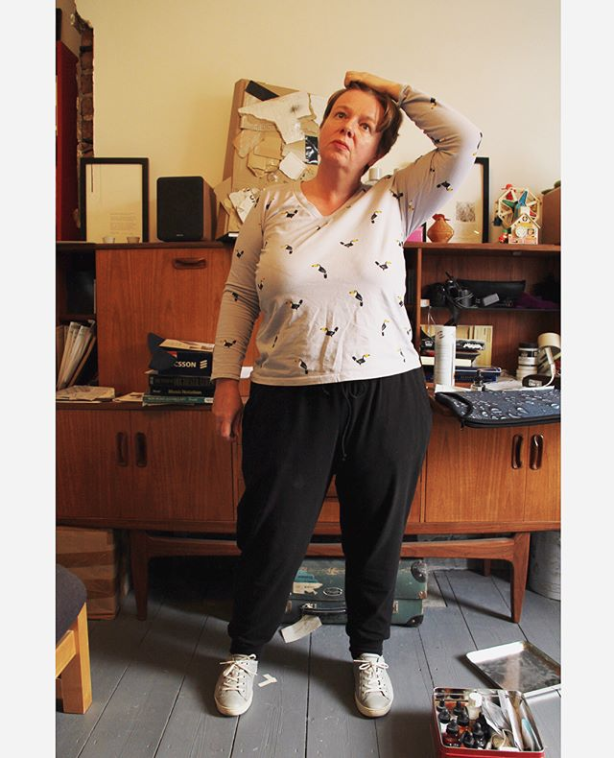 I’ve been feeling a lot of pressure lately to finally get a plain version of my cheerful-birdies Hudson Pants made up so that people stop asking me if I’m wearing pyjamas – and so they can serve double-duty as wearable-out wear when I’m in Australia in a couple of weeks. I’d been freaking out about this for a number of reasons – I didn’t know if I could trust the changes I’d drawn into the pattern from last time’s fitting attempts because they’d been a bit haphazard, the fabric I’d bought was quite expensive (for me, anyway) but also lighter than I’d expected and I was worried it would be too light for trousers, and I also remembered the last pair as having taken about a week to make and my brain was going nuts trying to work out if it could even be done in time. So of course I procrastinated. Until my brain was so full of fog from this and all the other crap swirling about in there at the moment that I couldn’t do anything at all.

So a couple of days ago I decided to just cut out the original pattern, mark in the changes from last time and work from there. Cutting out was, as always a nightmare – this is the part of the process I absolutely loathe. Takes frickin’ hours, kills my back, and I’m always worried I’m going to get it wrong in some critical way. Usually because the bloody fabric won’t lie flat and straight no matter what I do. Anyway, got through it and was a bit in the zone, so I zipped on to cutting out a scoop-neck Lou Box Top from the leftover sea-green rayon jersey from the Union Street Tee I made back in May. I hadn’t really planned to make another Lou Box Top – I feel that in general the Union Streets are a bit more flattering, but frankly with all the stress I’ve gained a bit more me than I’m entirely comfortable with and it just felt like I’d be happy to have something a bit loose to wear until I reduce back to something less blobby.

Yesterday, then, I decided to just clear out my brain by just starting on the Hudsons and see if that would reduce the stress at all. And whaddaya know? I FINISHED THEM IN A DAY! Started around midday and basically they were done by 8 with breaks for lunch and dinner and not moving particularly fast on any of it. I’m wearing them right now and am SO HAPPY with them! Because it turned out my changes from last time have resulted in a perfect fit first time! The fabric is light, yes, but super-soft and stretchy and is sitting really nicely. And as an added bonus, while the cuffs on the cheerful-birdies version are quite firm, these ones stretch right over my Giant CalvesTM which means that for their planned use as plane pants, I won’t need to find a bathroom in order to change into/out of the hideous-instrument-of-torture flight socks! HURRAH!

And then I went right on and sewed up half the sea-green top before the bobbin ran out of thread and I realised it was 2.30am and I really should get to bed. So today all that remained to do was change the bobbin thread, sew the side seams and hem and it was done. HURRAH!

The main thing this has really brought home to me though is how far my sewing has come. Last time I made the Hudsons I felt I was really stretching my sewing skills pretty much to their limit – I hadn’t made very much in knits at that point and never made any sort of pants apart from the pyjama bottoms from Love at First Stitch. I had to look up so much and while I’m super-pleased with the result and have been wearing them solidly for about a year now, they were a real challenge for me at the time. This pair, though (and even taking into account I’ve made the pattern before, it was a while back), I kind of just gently sailed through with an “oh that’s next”. Nothing felt particularly challenging and the only thing I had to look up this time was the buttonholes (because I do them rarely, and I kind of messed them up anyway, but it’s not a big deal). The Lou Box Top was similar. The last one I made (not blogged) was the first knit top I ever made. The neckline’s wobbly, the hems are a mess and I laid the fabric out on the cross-grain (oops). This time round, it was all just about checking the order and then just doing it. Nothing needed particular fussing about or double-checking, and tomorrow I’ll be able to wear a new top to rehearsal 🙂